The Story of Andromeda Electric Orchestra

​In the fall of 2018, Alfred Surenyan ended a 7 year tenure as a professor at the Art Institute of CA, Inland Empire when the school shut its doors.  In December of that year he taught his final class at AI on his birthday.  A couple of weeks later he went to Las Vegas to unwind and reflect on his career.  During the first night he was in Vegas he was sitting on the patio of Las Vegas Bl in front of Paris Hotel with his sister and enjoying a slushy in an Eiffel Tower shaped souvenir cup.  He looked up at the rows of Hotels in front of him and just absorbed the lights and sounds and with a burst of the energy stood up and said “I am going to start an electric orchestra!!”  This was the beginning of AEO.


During the Spring of 2019, He founded Andromeda Electric Orchestra and started the first plans towards moving from an idea to an actual orchestra.  He created a website, information, a few conception photos and a list of the unique orchestrations.  The Summer of 2019 was set for a launch party of the orchestra with the first fund raising event scheduled in August.  However, he got ill and ended up in the hospital with an infection in his throat on the weekend of the planned party.  He was notified by the doctor that his organs were shutting down and that he was dying.  However, his determination and desire to see to create this orchestra were stronger than the weakened organs, and  his body started to heal. While in the hospital, Alfred was reflecting on his life and how he wanted to start this orchestra.  He started to make plans on how he should apply for a 501(c)(3) non profit organization and also begin plans for fundraising for this orchestra.   A few months after he left the hospital, Alfred went ahead with the launch party in the Fall of 2019.


February of 2020, the paperwork was filed with Legal Zoom and was incorporated by the State of California.  On May 2020, The IRS sent a letter of confirmation that the Federal Government now recognizes AEO as a 501(c)(3) Non profit organization.  This was a huge accomplishment, but yet another road block was placed before Alfred.  The World Health Organization had proclaimed that there is now a global pandemic and all businesses, organizations, education institutions, and everything else was shut down.  There was no way to do any fund raising, much less program a concert.


Jennifer Walton, a long time friend of Alfred Surenyan, has started a business called LA Curbside Entertainment, a means of a way for musicians to perform outside on lawns and curbsides for tips rather than the traditional way of performing with pay.  AEO partnered with LA Curbside Entertainment and produced 5 curbside performances from June of 2020- June of 2021.  This was an opportunity for Alfred to develop the concept of an electric orchestra.


With the help of his friends Hauk Heimdallsman and Michael Ryan Armstrong, Alfred was able to develop the details of the ensemble.  Hauk helped in the creation of the audio production and performance, while Michael helped  with the printing and organization of the musical scores and instrumental parts.  Tatyana Surenyan-Krech helped in many ways for the performances as well as feeding musicians.  She also used her skills with sewing to create handmade items for those who donate to the orchestra.


On November 6 of 2021, the first major step of the dream of the orchestra was born.  AEO had its first venue concert at the Tarzana Community and Cultural Center.  This concert contained a group of 27 musicians and a list of repertoire that has now become the signature of AEO.  The next steps of the orchestra is to follow.  AEO has plans for both indoor and outdoor concerts for 2022 and beyond.  Sponsors and donations for these concerts will be needed for production as well as grants. It costs about $25K- $40K to produce one concert and all donations are appreciated for brining this unique orchestra to life. We hope that you can participate in this journey with Alfred Surenyan. 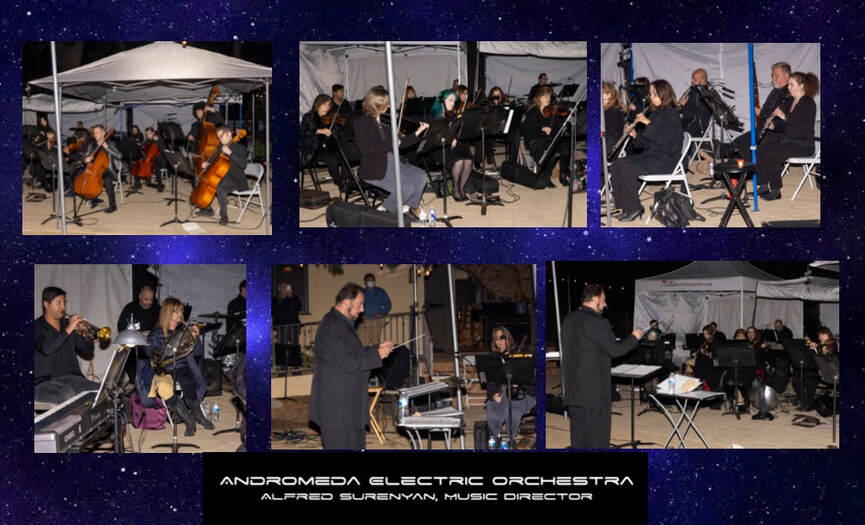