The effects of the processing to the music

What will these effects do to preexisting music?  It would take them to the next level.  Adding a chorus or delay to a Mozart Symphony or distortion to a Beethoven piece would create a brand new sound world.  Changing the arrangement and adding a drum set under this structure and perhaps synth sounds from the EWIs rather than traditional musical instrument patches would add a new dimension and expand the pallet of the sounds selected by composers from traditional instruments.  Original music can be composed with these effects in mind.  Creating an entire new world of music.  Mixing the effects with Synths and electric percussion can be limitless.


The orchestra has never been stagnate from its conception in around the Baroque Era.  Each period added a new dimension.  The Baroque Era was the foundations with strings and a few winds and the horn.  The Classical Era expanded the woodwinds and the Romantic Era expanded the Brass.  The 20th Century saw the expanding pallet of the percussion section, including the piano.  The later part of the 20th Century moved even further by adding a few electric instruments, pre-taped sounds and recording.  The musical pieces expanded alongside the expansion of the orchestra.  So here in the 21st Century, where does the orchestral forces go?  Andromeda Electric Orchestra seeks to finding this new path with electronics, electric instruments and effects.  It may not be the only direction of the orchestra, but this is the vision of Alfred Surenyan.
Educational Outreach

AEO being a huge supporter of education, will have an educational program.  This program is in the works for 2022 and beyond.  Programs will include a diverse region of Los Angeles.  The focus will be on teaching students in underprivileged areas of Los Angeles about the orchestra, composers, classical music and diversity,  and about the production of electric musical instruments.  Other programmings will include a family event where students and family members will have one on one experience with members of the orchestra, drum circles, arts and crafts, workshops, and hands on experience playing music with the orchestra.  Some of these events will include a concert presented by AEO.  Music will be focused on the production of an electric orchestra, music education, and world music (ranging music of multiple ethnic and racial backgrounds.

AEO has a diversity and inclusion policy.  This includes a diverse membership in the orchestra, diverse people of ethnic, racial, female and LGBTQ+ composers.  Musical programming will include both historical composers and living composers.  New and upcoming composers will also have an opportunity to have their music performed with AEO.  Submissions will be conducted during the course of seasons. 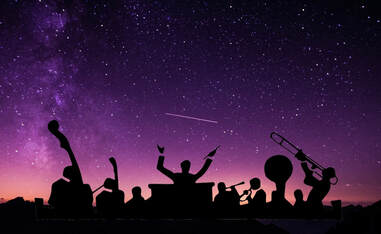