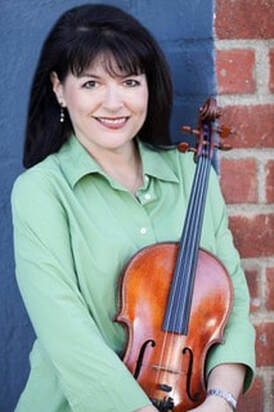 Suzanna Giordano Gignac, (Viola) is a NY native who studied Violin at the Hartt School of Music with Renato Bonacini and then CSU Northridge with Kathleen Lenski and Manuel Compinsky earning a Bachelor of Music degree cum laude.
Suzanna later continued her studies on viola with Alan de Veritch. She is a member of the Pasadena Symphony and has performed with L.A. Opera;  the Santa Barbara, Long Beach and Pacific Symphonies; Santa Cecilia Orchestra
(Principal Viola) and the Chamber Orchestra at St. Matthew’s. Summer performances include the Grand Tetons; Aspen; Coos Bay and Victoria (TX) Bach Festivals. As a soloist, Suzanna has appeared with the Santa Monica; Calabasas; and Saddleback Chamber Orchestras. Her love for early music brought her to study with Elizabeth Blumenstock, Manfredo Kraemer and Simon
Standage and play under the directorship of Rachel Podger and Andrew Manze. She is co-founder of the period ensemble; Angeles Consort and  was Principal Viola with Musica Angelica Baroque Orchestra for nearly 25 years;
with whom she has also soloed with. Suzanna has appeared as Principal Viola with La Follia Austin