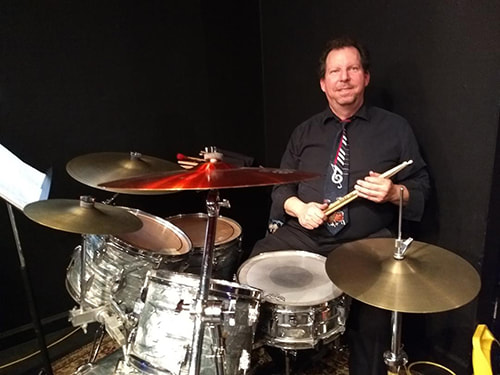 Via Instrumental Casting, Scott appears in an 1890s marching band in the HBO movie Deadwood and in a 1980s wedding band in the tv show Black Monday, Showtime's Penny Dreadful, and the upcoming remake of Perry Mason on HBO.

Scott discovered a drum set in a music store window in Panorama City at the age of 11, and literally needed to be dragged away. After a few months of lessons, Scott joined the 6th grade concert band at Wilbur Elementary School in Tarzana, and was involved with music programs through his entire education including his entire college career: Concert band, jazz band, Marching band, and the periodic jam band.

Scott's passion is in the Musical Theatre genre, with favorite shows played: Hair, Fiddler on the Roof, Guys & Dolls, Beauty & the Beast, The Music Man, The Addams Family, and Oklahoma. Scott has been in the Percussion section of the 95 member LA Symphonic Winds, under the direction of Stephen Piazza, for the past 19 seasons, and has been privileged to have gone on several international tours with this talented group of musicians: Austria, Italy, France and the UK, as well as New Orleans, LA.