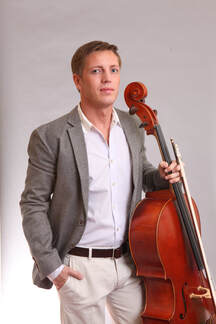 Cellist Ruslan Biryukov (Руслан Бирюков), known for his "superb artistry, passion and individuality," represents a new generation of creative professional musicians whose artistic level is recognized not only by awards, but also by a worldwide audience. Mr. Biryukov has performed throughout the world, including countries in the former USSR, Europe, and United States. He was the only cellist ever invited to perform for 10 consecutive years solo recitals at the Sundays Live Concert Series in the Los Angeles County Museum of Art, the longest running live radio broadcasted concert series in the United States, as well as the only Russian cellist invited to solo with orchestra during the inaugural season of the Renée and Henry Segerstrom Concert Hall. Memorable chamber music experience includes performances with world renowned violinist Midori at the Disney Hall in Los Angeles, cellist Kirill Rodin at the Tchaikovsky Moscow Conservatory, and members of the Ysaye Quartet.

Ruslan Biryukov has been a master teacher in music festivals in Europe and Russia. He has held teaching positions at the Ippolitov-Ivanov State Institute of Music in Moscow, Russia and the Music Academy in Lovran, Croatia. His creative artistic ideas are based upon the tradition he learned from esteemed artists Kirill Rodin, Mstislav Rostropovich, Daniil Shafran, Natalia Gutman, Janos Starker, Steven Isserlis, and Eleonore Schoenfeld.

Mr. Biryukov received his formal music education at Baku Music Academy in Azerbaijan, Tchaikovsky Moscow Conservatory in Russia, and the USC Thornton School of Music. He first earned international recognition by winning major awards in Azerbaijan and by the inclusion of his name in the Gold Book of Russia's international program "New Names". Biryukov has gone on to win numerous other awards worldwide, including the 17th Mu Phi Epsilon International Competition.
​
Founder of the Glendale Philharmonic Orchestra and Artistic Director of Positive Motions Concert Series in Los Angeles, heralded as a charismatic performer who captivates the attention of his audiences, Ruslan Biryukov is a much sought-after young musician who is committed to a lifetime of music making by sharing the art of music with worldwide audiences from all walks of life. 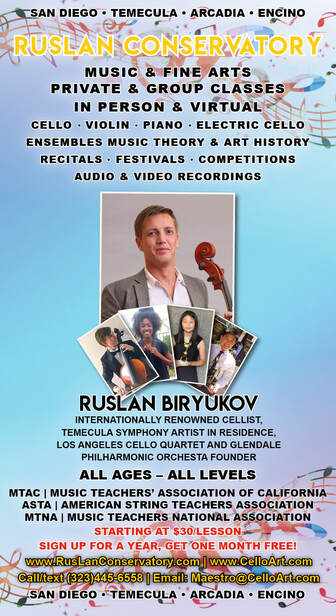