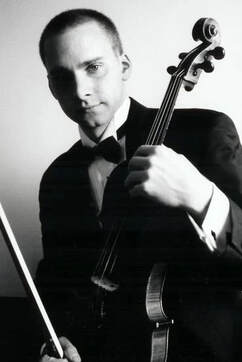 
Matthew is a professionally trained violist who has dedicated the past several decades to developing his craft. Born in Fort Lauderdale Florida, the Witmers relocated to Philadelphia where Matthew began to demonstrate his love for singing and playing piano, and was introduced to string instruments in the fourth grade. Upon completion of high school, Matthew received his Bachelor of Music Degree in Viola Performance from the Boston Conservatory,


Matthew currently resides in Beverly Hills where he performs and contracts string players for chamber concerts, musicals, private events, weddings, recording sessions, church and corporate events. He has also performed for celebrity weddings such as those for members of the bands Weezer, Green Day and Air Supply and continues to record on film trailers, video games, film scores, and has been featured on television shows, feature films, and music videos.


Despite his busy schedule, Matthew still finds time to teach a full studio of viola, violin, and piano students as well as coach at area schools and give lectures to young students on professional life. Every December Matthew enjoys three and a half weeks of running from church to church playing Christmas music.


Matthew has played almost every musical that has a viola part at least once, if not numerous runs of the show. Matthew also enjoys playing violin as well as viola on musicals. Matthew was principal violist for the Hollywood Concert Orchestra for their 2017 and 2018 tours of 11 cities in China playing popular film classics and in 2017 was also invited by the world famous cellist Yo-Yo Ma to arrange and perform Francois Couperin’s Concert Pieces with him in Yo-Yo Ma’s string quartet. Most recently, Matthew was invited to perform with Ariana Grande on the 2020 Grammys.