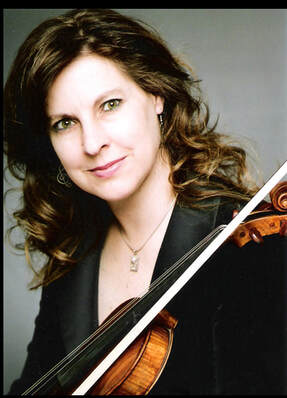 Jennifer Walton began playing violin at the age of three and piano at the age of five. Continuous musical training was received from her mother, Grammy Award winning vocalist and arranger, Salli Terri, and father, John Biggs, composer and founder of the John Biggs Consort. This training was in the areas of sight-reading, theory, arranging, improvisation, ornamentation, music appreciation, and performance practices on instruments of the Renaissance and Baroque Eras. As a young teenager, she toured throughout South America and Asia with her father's ensemble, the John Biggs Consort, performing music from the Renaissance, Baroque, Classical, and Contemporary Eras. Entering California State University, Fullerton on a piano scholarship, she double majored briefly then earned her Bachelor's Degree in Violin Performance. Jennifer has taught private violin, piano, theory, and composition lessons to all ages since 1981.


Jennifer has appeared as 'Violinist' in numerous tv shows such as Friends and Seinfeld and has performed on hundreds of major motion picture soundtracks as well as playing on the Emmy Awards and The Tonight Show. She has played in the notable string sections on CDs for Michael Jackson, Diana Krall, Nora Jones, Ray Charles, Barry Manilow, Faith Hill, Deadmau5 and so many more. Her extensive credits may be viewed on the Credits page at Instrumental Casting.


Jennifer also created LA Curbside Entertainment in May, 2020, to provide live entertainment to people in their communities.