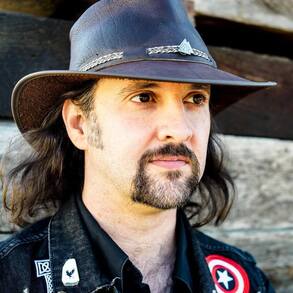 Hauk has a tradition for defying convention and limitation. His songs are too country for metal, too heavy for country, too punk for folk, too folk for punk, and always in your face. The chorus from Red Tail Rising, the title track of Hauk’s 9th solo album says it all: “Falcon feathers on my back--no surrender, just attack…”

After 15 years of recording and touring as a solo performer, Hauk teamed up with violinist Karin Dell to form the alt country band Black Hat Society. Described by Ripple Music as “rather dark in nature with a nice twangy bluegrass sort of vibe" and "outlaw sort of country western style music,” Black Hat Society began to forge bold new directions in the realm of alternative country.

To date, Hauk has released 11 solo albums, two albums with Black Hat Society, an album with The Pirates Charles, and has produced bands like No Convention, Margot Lane and the Greybirds, Post Relic, and more. He has scored two feature films and many short films including the award winning “Pirate Captain Toledano.” Current projects include the third Black Hat Society album, the debut album for Elf Queen, and the debut EP from Danny Cano.