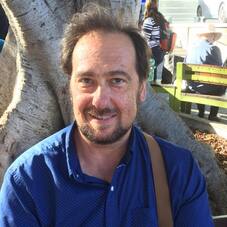 Alfred Surenyan is a composer, musicologist and music educator. He studied music composition, piano, music technology, and conducting at California State University, Northridge.  He earned his Bachelor of music in 1997 and continued his education at CSUN and earned his Master of Music in 2001.  He furthered his education and studied Music Composition, Music Technology, and Musicology at Claremont Graduate University where he earned his Doctor of Musical Arts Degree in 2009.

Dr. Surenyan has composed music for a wide range of musical genres and styles.  He has composed for the Orchestra, Choir, Chamber Music and various sizes and instrumentation, and Electronic Music. His music has been performed by many Los Angeles professional musicians throughout Southern California.  He continues his path as a composer with musical works in similar styles including music for The Andromeda Electric Orchestra.

He has taught students of all levels both in the classroom and private lessons.  His most current position was at The Art Institute of CA- Inland Empire where he taught Audio Production, Music Composition and Theory, He also taught Music Technology at Pilibos Armenian School and has taught at Pasadena City College.

Dr. Surenyan is a future driven creative individual.  He wanted to create an ensemble that incorporate  traditional music with modern electric instruments.  The Andromeda Electric Orchestra is the infusion of both these concepts. His vision is to bring music together with the traditional sound adding a cutting edge new sounds and the capabilities of electric strings, winds and other electric instruments.

Dr. Surenyan currently resides in Los Angeles. He is also writing a book on the music of Star Wars.  Hie is an avid Star Wars Fan and is a huge collector of Star Wars and other Science Fiction collectibles and toys.